Known as the heel of Italy, Salento is the real doorway to Orient in Apulia. It was indeed on its ground that centuries before the advent of Christianity the Japigia people landed from Greece; and, once again, it was from Orient that Jew, Byzantine, Arabian, Saracen and Turkish people arrived.

It was from the Land of Otranto – the Medieval name of Salento- that, after its colonization, the Occidental armies could leave from the very Eastern strip of Italy in order to begin their conquest of the East, thus fully becoming the Doorway to Orient.

Therefore, Salento could be considered as the geo-political core of the European, Mediterranean and Near Eastern history of the last three thousand years, the very centre of ecumene, or “ as the world was known in Ancient time”. At the extreme strip of this land and of Italy, laid down on a blue bay of water and sky there is Otranto, with its village surrounded by ancient walls.

Otranto’s history has roots in the mists of time. According to some people, its origins go back to Noah, according to others, they go back to Cretan people or to Japigia people. An extraordinary fragment of the past, which left so many traces of ancient activities and mysterious rituals, could be represented by the “Badisco’s caverns”, that show human signs dating back to the Neolithic or even before.

Since its discovery, in 1970, the exceptional nature of such a site has been commonly known: at the XIV National Congress on History and Prehistory, Graziosi defined it “ the most important sacred monument of late Prehistory that can’t be compared to any other so far known in Europe” 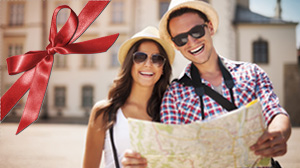